Two teenagers have won the prize of a lifetime to take their first steps to Formula One after beating hundreds of entrants to the top prize in the ROKiT Racing Star competition.

Deagen Fairclough and Monica Boulton Ramos will now spend six months training to race on the track next season in a high-speed Formula 4 car as part of a £500,000 programme to groom them for the pinnacle of motor racing.

The innovative ROKiT Racing Star scheme is unique in British motor racing and aimed at seeking out youngsters who struggle to find the tens of thousands of pounds needed to compete in motor racing. The competition tested more than a thousand youngsters from all over Britain in the digital world by allowing them to race online in an esports competition for the chance to transfer their skills from the laptop to the track.

Deagen and Monica, both sixteen-years-old, swept the board in the finals Sunday, May 15 at the University of Bolton’s National Centre for Motorsport Engineering in impressive performances that will catapult them into the exotic – and expensive – world of motor racing.

Deagen was competing only hours before facing his religious education GCSE exam paper on Monday at the Oriel High School in Crawley, Surrey. Monica was also back at her desk at the Sponne School near her home in Towcester, Northamptonshire, and eager to tell her schoolmates that she is setting out on the ultimate quest in sport – to become a female full-time driver in Formula One. 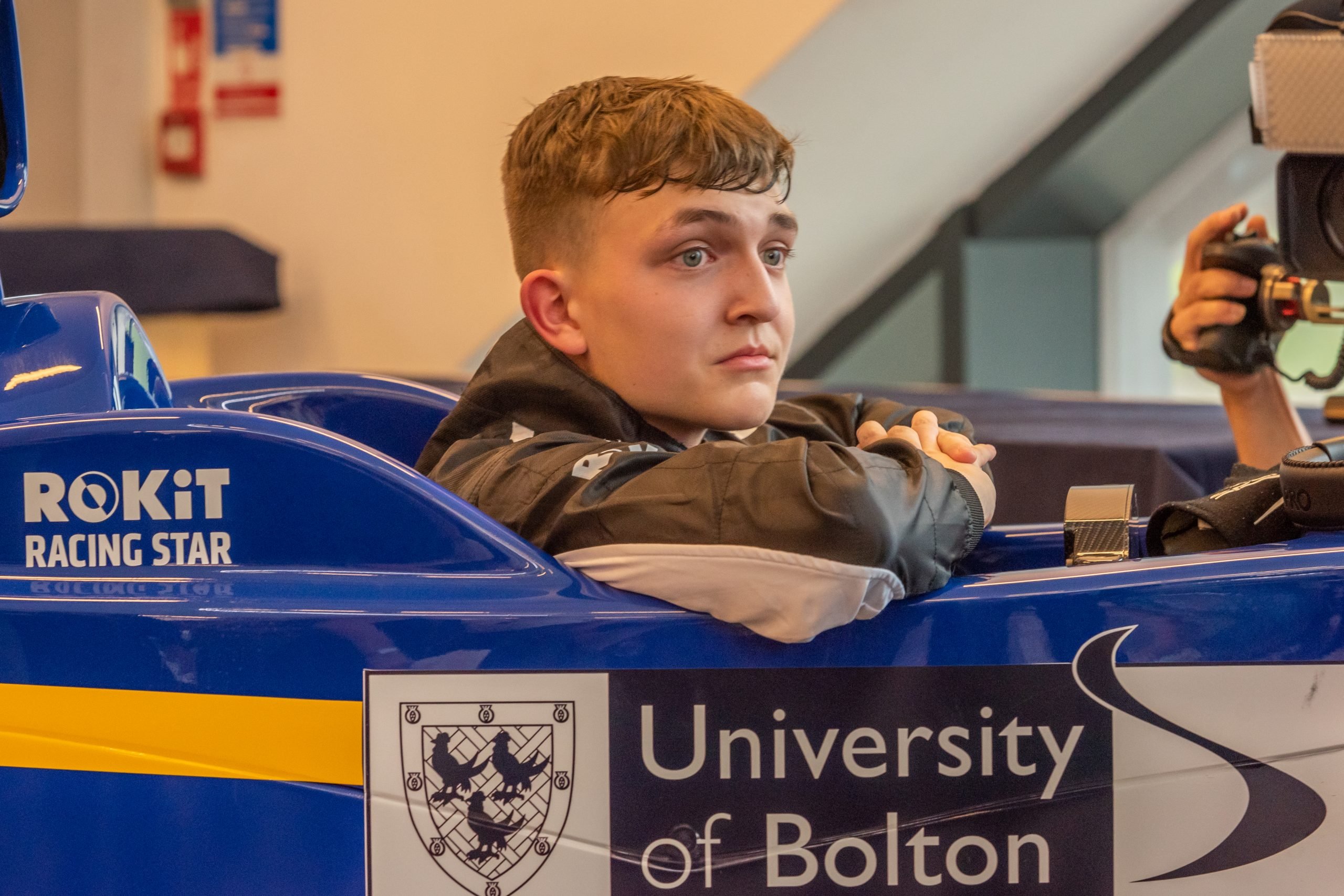 “I hope I can concentrate,” Deagen said as he described the victory at the University of Bolton on Sunday as “life-changing”. Before the last of his two races around a virtual Brands Hatch track, Deagen had sat head in hands contemplating the impact victory in the competition might have. Deagen’s father Garreth is a kitchen fitter and his mum Sian a beautician and they have struggled to fund a fledgling career that soaks up tens of thousands of pounds. Now their son will be the focus of a £250,000 budget as he trains to become the leader of a Formula 4 team.

“We haven’t got £2,500, never mind £250,000,” a tearful Sian said. She had been unable to watch as Deagen had dominated the racing, taking pole position and winning both rounds of the competition in high-tech simulators costing £85,000 each, beating the 16 boys in the final from towns and villages as far apart as the south of England and Scotland. “We talk about dreams coming true, but this unbelievable,” Sian added. “Deagen has been racing a Ford Fiesta and Garreth has been the mechanic and I do the catering and cleaning for the team just to pay his way,” she added. “Now we don’t have to worry about the money and Deagen stands the chance of having a fantastic career.”

Monica faces a tough path attempting to navigate her way along a tough route to Formula One where few women have been able break through to the top. She dominated her final, winning both races on a digital version of the famous Brands Hatch racetrack on simulators worth more than £85,000 imported specially from Switzerland. The competition was tough, but Monica stayed cool to take the top prize. Alongside preparation for her GCSE exams at Sponne School in Towcester, Monica will now be plunged into the exotic world of motor racing, being trained physically and mentally for competition on the track next year.

“I am still speechless,” Monica said. “I had performed well in the qualifying races online and thought I had a chance but the competition from the other girls here in Bolton was tremendous and I am just delighted I have come through.” 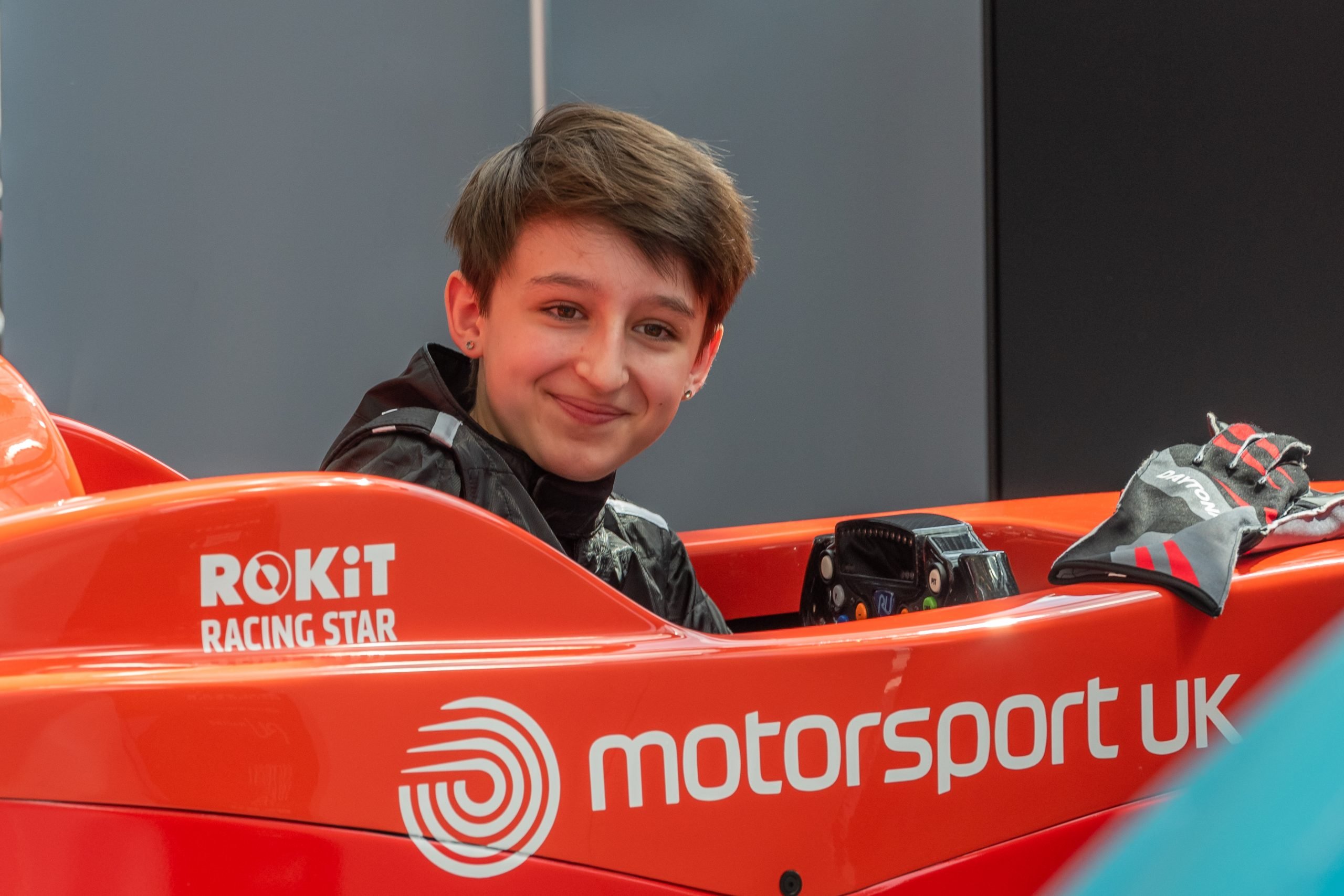 Monica’s parents, Stuart and Sonia, were on hand at the University of Bolton’s huge atrium, which doubled as the stadium for the finals, to cheer their daughter on, although the tension over the two days of competition was draining. “It was exhausting,” Sonia said. “She has been dreaming about this event but now it has come true.”

Stuart is a senior engineer with the Mercedes Formula One team based in Brackley, so racing is in the blood, but, unlike many of her rivals yesterday, Monica is new to the world of esports racing. The Sponne School pupil had tried many sports before attending an event for aspiring girls in motorsport called ‘Dare to be Different’ run by Susie Wolff, the wife of Toto, the head of Mercedes Motorsport and a familiar face in Formula One. Monica’s first call after winning yesterday was to Susie to share her success.

Monica and Deagen will now be handed over to Motorsport UK, the governing body for motor racing in Britain, and the Hitech Race Team Academy, which is based at Silverstone, who will begin the arduous process of turning a talented esports gamer into a fully-fledged racing driver. They will be tested physically and trained in the cockpit of the 160mph Formula 4 car before applying for a coveted full racing licence. The ROKiT Racing Star programme will then cover all their costs in a sport that usually requires drivers to find tens of thousands of pounds worth of sponsorship. If Monica and Deagen are successful, they will be on the grid for the 2023 ROKiT Formula 4 Championships next season aiming to progress to the ultimate goal – Formula One. 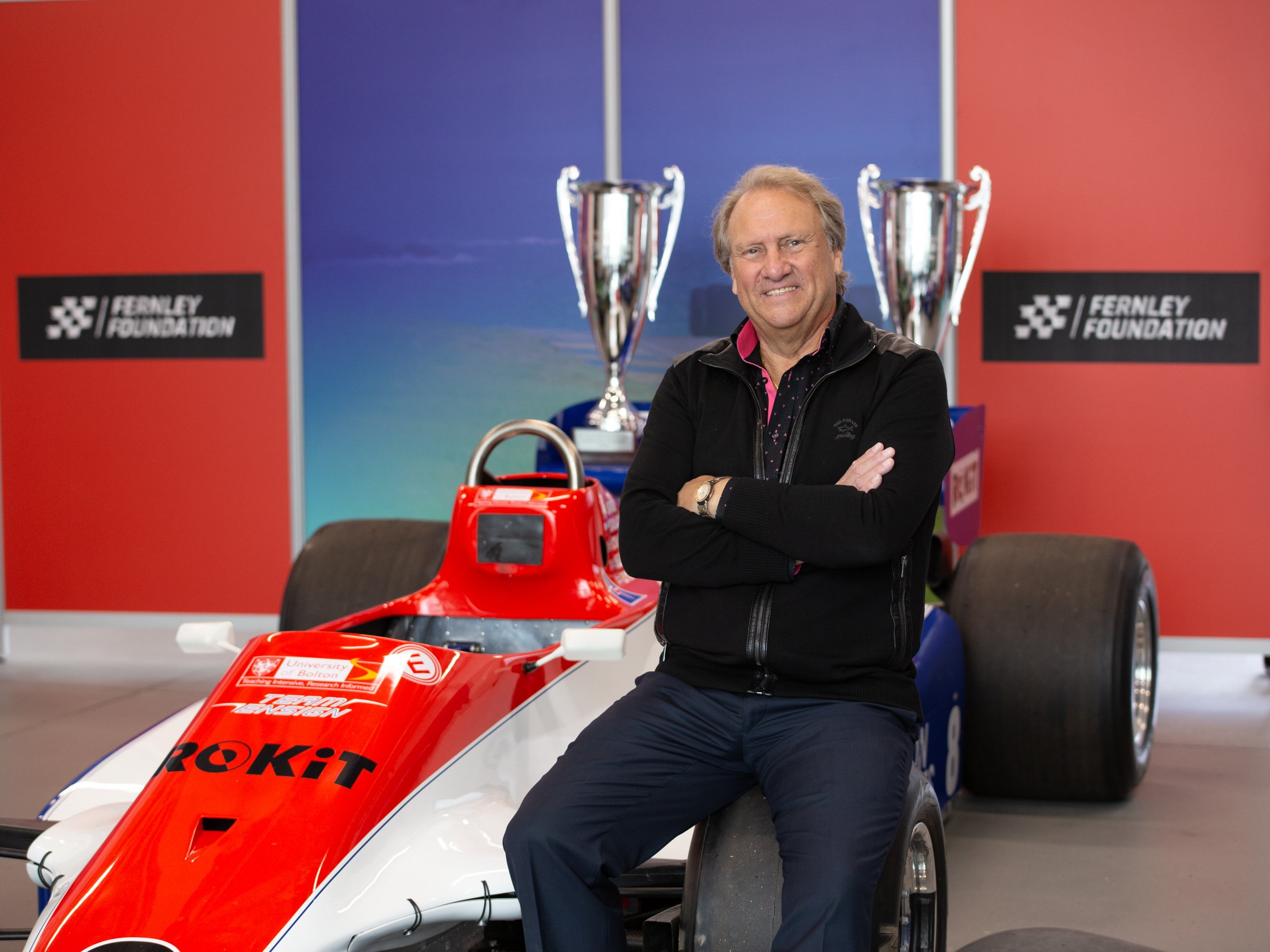 Fourteen and 15-year-olds from across the UK applied to take part in ROKiT Racing Star 2022, which launched in January. More than a thousand applicants were whittled down to 15 finalists – eight boys and seven girls – who competed in the magnificent atrium of NCME.

The competition was the brainchild of Bob Fernley, former deputy team principal of the Force India Formula One team, which is now Aston Martin and based at Silverstone. Brought up on a council estate in Stockport, Fernley wanted to find driver talent outside the usual pool of go-karters, who are often funded by rich and ambitious parents, and also to give an opportunity to girls, who have so far failed to break through to the top of motor sport in Formula One.

” Women are hugely under-represented in motor racing, and I wanted to give an opportunity to a new talent “

“Women are hugely under-represented in motor racing, and I wanted to give an opportunity to a new talent,” Fernley said. “Monica fits the bill. She is a talented gamer and now we want to take that talent and translate into performance in a real car in the real world. It is the opportunity of a lifetime, and I am sure she will grasp it.

“And Deagen has shown fantastic quality, too, in our finals. The driving standards were incredibly high and these two are great prospects for the future of motor racing in Britain. This is only the first year of Racing Star but we have already unearthed great talent among youngsters who might otherwise never get a chance to drive to the top of motor racing.” 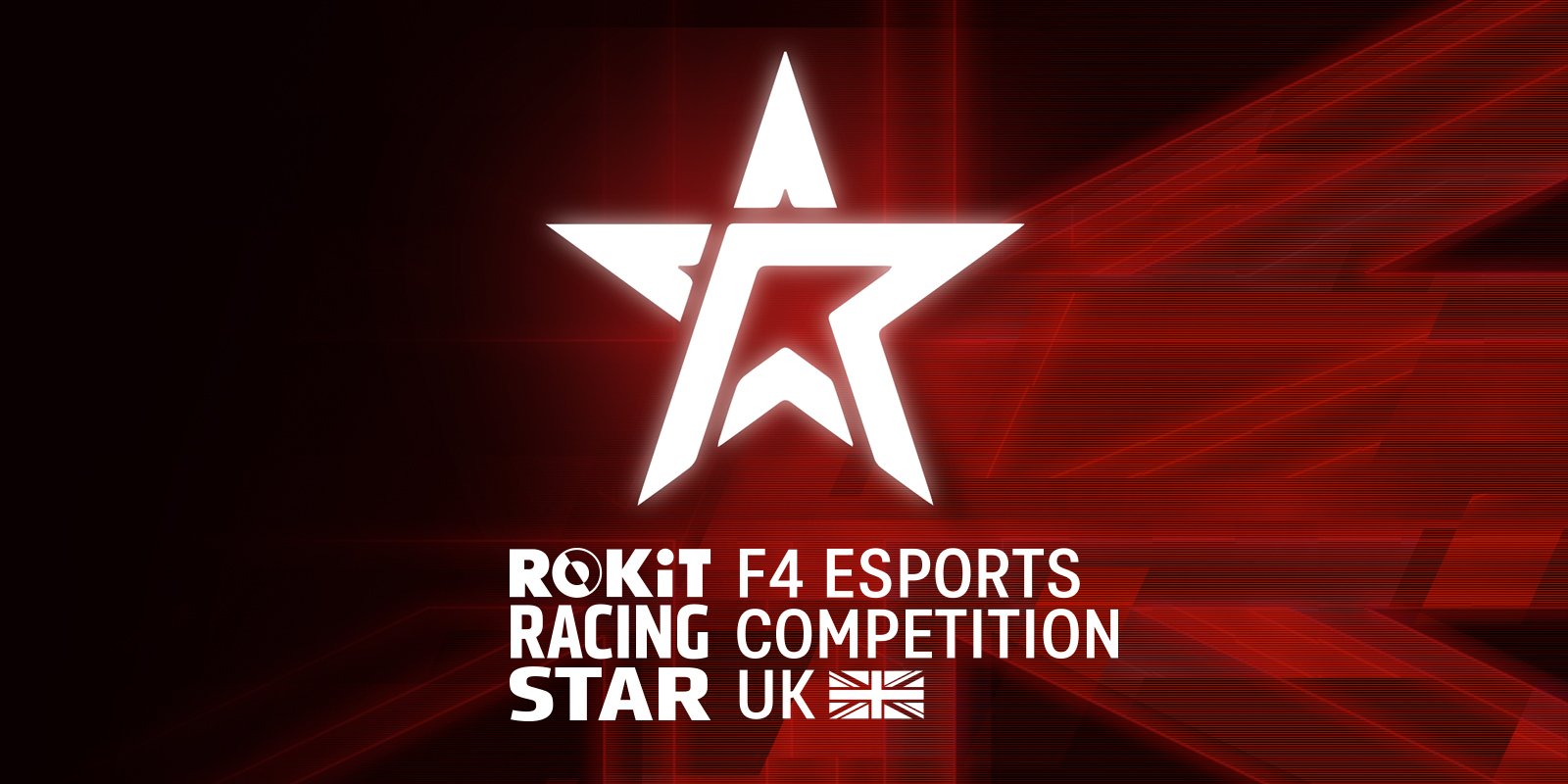